Flood, The 1957. The 1957 Flood The area around Lampasas drains to the Sulphur Creek basin, and the stream flows across the town from the southwestern edge to the east side, intersecting with Burleson Creek and other branches along the way. Floods have struck the town throughout its history, and notable early ones occurred in 1873, 1936 and 1944. Following the 1944 rise, city officials took measures to address the problem, dredging the creek and constructing earthen levees. Such work, however, failed to prepare the town for what would occur in the next decade. 1957 was a year of heavy rainfall in Texas, following a long period of drought. On May 12 of that year, only two weeks after an earlier rise, sustained downpours in the area caused water to begin collecting along upper reaches of the Sulphur Creek headwaters, and as it quickly joined up with downstream tributaries it began to spill over the banks. Through the night of Mothers Day, May 12, 1957, floodwaters rages through the middle of town, slamming into stores and houses with dramatic force, and washing away cars and other property. Flat tops of buildings around the square became islands of safety for those trapped by the water, and residents fought to save themselves and their families. Tragically, five people died in the incident. Following the devastating flood, the citizens of Lampasas regrouped and rebuilt, and businesses reopened within months. The tremendous loss of life and property caused by the Mothers Day flood of 1957 spurred city officials to action, and new flood control measures soon followed. The 1957 flood thus proved to be a turning point in city planning and development, as well as the history of Lampasas. (2005) #14849 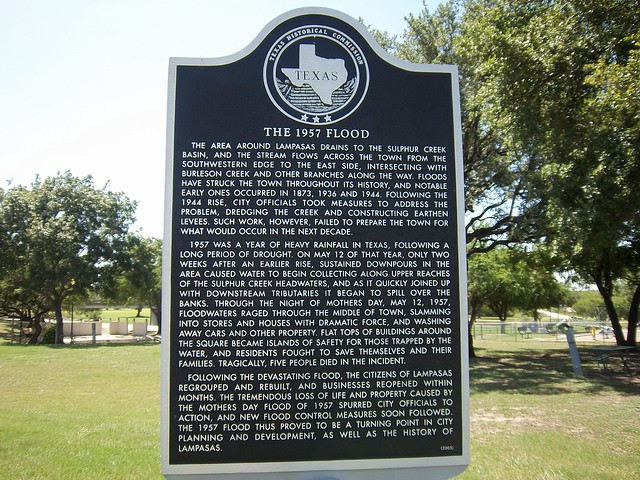 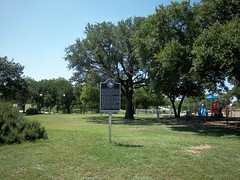