This memorial is dedicated to the memory of Flt Lt Eugene Georges Achilles Seghers DFC Croix De Guerre Royal Air Force Volunteer Reserve One of Churchill's "Few" Born Ledeberg, Ghent, Belgium on 7th April 1910 Killed In Action above Uckfield on 26th July 1944 Serving with No. 91 Squadron RAF, Eugene Seghers and his Mk XIV Spitfire took off from RAF Deanland Advanced Landing Ground on an "Anti-Diver" patrol and intercepted a German V1 Flying Bomb south of Uckfield. After intense cannon shell-fire failed to destroy the "Doodlebug", its engine cut out, meaning that its terrible descent towards the town was imminent. Flight Lieutenant Seghers then courageously attempted to deflect the high explosive Flying Bomb away from Uckfield using his own aircraft's wing. Near this location at 14:22 hrs he made contact with the bomb causing it to detonate, destroying the Spitfire and killing the brave airman instantly. SUB ALIS GLORIAE

Note that the memorial consists of local vernacular brick with a plaque of Belgian Blue Stone. These materials signify the local brick fields from which the loss of Seghers was observed and the Belgian Blue Stone refers to Seghers' homeland.
Also see http://uckfieldnews.com/eugene-seghers-unveiling-of-memorial-in-uckfield/ 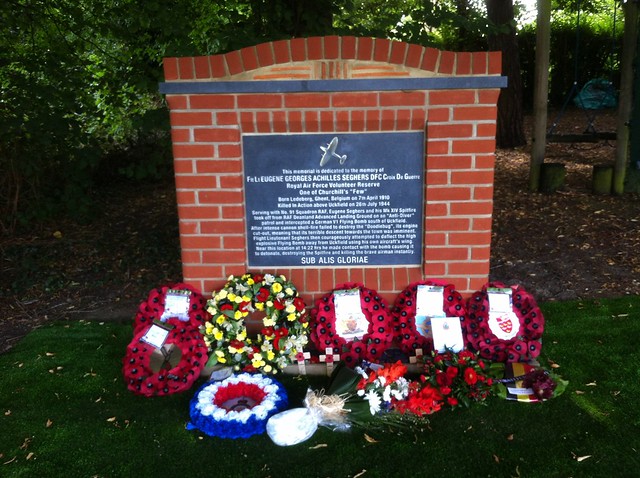 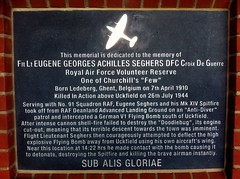 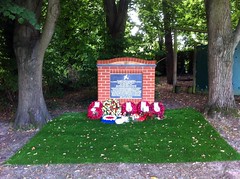 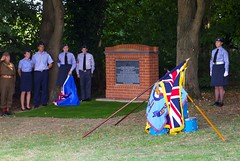