Hamilton Park Community Located ten miles north of downtown Dallas, the African American community of Hamilton Park began as the White Rock Farming Settlement. In the 1940s and 1950s, racial violence in the South Dallas community of Queen City and the discriminatory displacement of African American residents for the new Love Field Municipal Airport resulted in the need for many of these families to move outside of the downtown area. In response, Jerome Crossman, a local oilman, compelled the Dallas Citizens' Interracial Association (DCIA) to locate land in North Dallas for the project and consulted philanthropist Karl S.J. Hoblitzelle for funding. On February 13, 1953, the Hoblitzelle Foundation lent DCIA funds to purchase acreage to address the housing shortage of African Americans. Named for Dr. Richard Theodore Hamilton, an influential voice in the African American Equality movement in Dallas, the Hamilton Park Community was the first African American suburban development in Dallas. Intentionally planned in two phases with the segregated twelve-grade school at the center and each street named for prominent African American individuals and institutions, the community officially opened in 1954. By 1958, many homes built near the school were complete and middle-class families began to move in with the community complete by 1961 with 741 single-family homes. In addition to the school, the community included three churches, a shopping center, and park, complete with a swimming pool, tennis court, basketball court, pavilion and playground. Since the 1950s, the Hamilton Park Civic League has served the community residents, connecting them with City of Dallas resources, encouraging voter registration and turnout, and planning community events. This sense of community and pride among residents helps preserve the heritage and legacy of the original homeowners. (2016) Marker is property of the State of Texas 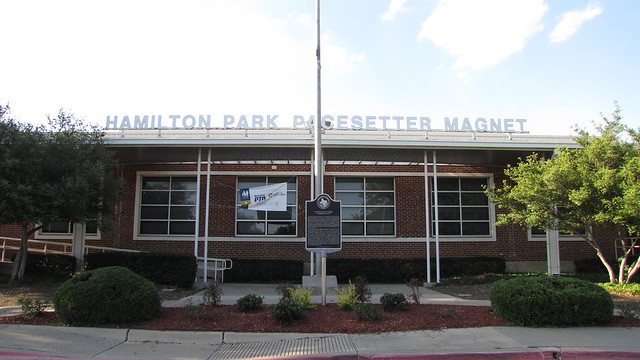 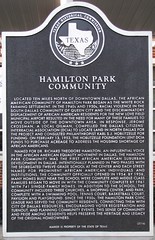 by Texas Historical Commission on 13 May 2017