Riverside Park: Pig Farm to Park. The Shuswap Milling Company occupied riverfront land north of Lorne Street between 1st and 3rd Avenues. Besides a lumber mill, owner James McIntosh ran a flour mill and pig farm from 1878-1901. Public outcry forced the closure of the hog yard, and people replaced pigs along the riverfront and beach. The mill burned down in a massive fire in 1901. McIntosh died soon afterwards and his widow sold part of the land to the City for a park. Over the next few years, an irrigation system was installed, and swimming facilities improved. Starting in 1910, the ground was levelled, trees planted, and an athletic field laid out. A grandstand was built in 1911. The farmers' market and fall fair were held in the park. During World War I, the Rocky Mountain Rangers used the park as their training grounds. The first Parks Board was organized in 1920. More trees were planted throughout the 1920s and the ball park expanded. In 1922 the Kamloops Lawn Bowling Club opened and a bandstand built for live music and open air dances. The Rotary Club also planted the first Rotary Wheel rose garden. Today Riverside Park covers 7 hectares and is the crown jewel of Kamloops' extensive park system. 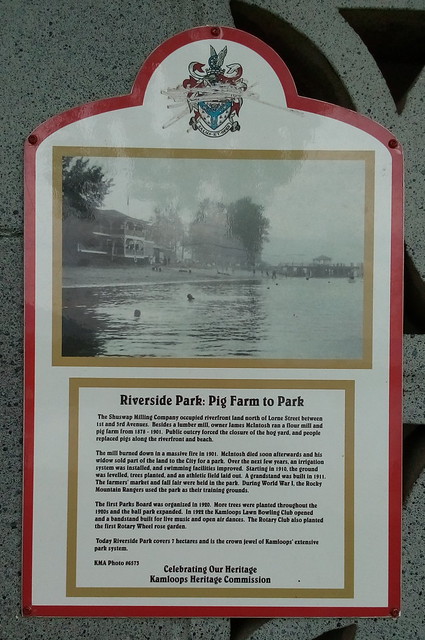 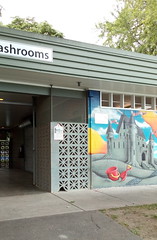