1935/1958. Dutch Reformed Church Halls. The first DR Church hall “Zaal” in Knysna was of corrugated iron construction and stood in the Main Street where the “ou Fabriek” stands today which, prior to becoming a church hall, had served as a police station. The first church hall on this site in Fichat Street was known as the “kleinsaal”, built in 1935 and was regularly used for Sunday School for the children. A new hall, adjoining the “kleinsaal”, was built in 1958 to accommodate 600 parishioners. It was designed by the George based architects Smit & Fraser. The cornerstone was laid on 17 July 1958. 440 wooden chairs were purchased to furnish the extended hall, and the blackwood benches in the gallery were supplied by Fechter & Vosloo. 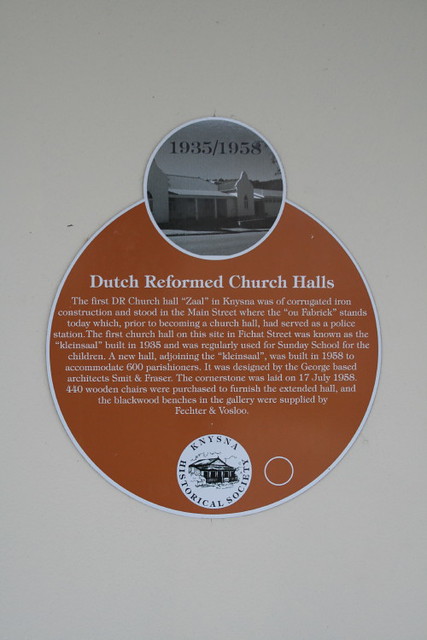