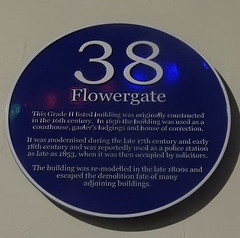 38 Flowergate This Grade I listed building was originally constructed in the 16th century. In 1636 the building was used as a courthouse, gaoler's lodgings and house of correction. It was modernised during the late 17th century and early 18th century and was reportedly used as a police station as late as 1853, when it was then occupied by solicitors. The building was re-modelled in the late 1800s and escaped the demolition fate of many adjoining buildings. 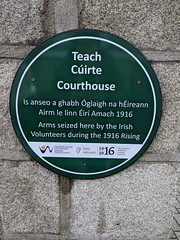 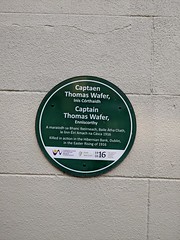 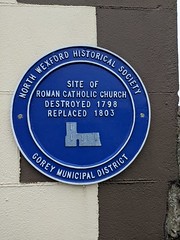 English translation: Friend, this pottery attests to the first quarter of a century that the Banda del Passatore, with its “seniors” and young people who have been part of it, has brought Brisighella's greeting with countless “services” to many peoples of Europe in the spirit of the “sol da de '...” only to be given... a great contribution to the good cause of Romagna's wines [AWS Translate]

On this site stood the Royal Hunting Lodge of Beskwood. It was while staying here in August 1485 that King Richard III learned of Henry Tudor's invasion 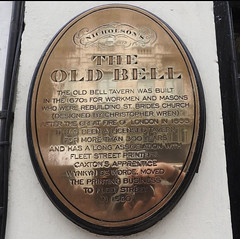 The Old Bell The Old Bell Tavern was built in the 1670s for workmen and masons who were rebuilding St Brides Church (designed by Christopher Wren) after the Great Fire of London in 1666. It has been a licensed tavern for more than 300 years and has a long asociation with Fleet Street printers. Caxton's apprentice Wynkyn de Worde, moved the printing business to Fleet Street in 1500 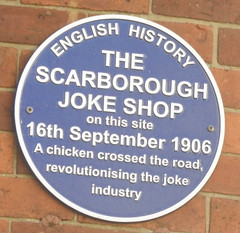 The Scarborough Joke Shop on this site 16th September 1906 A chicken crossed the road, revolutionising the joke industry

Site of the Great Marton Church of England Girls' School built 1854 and rebuilt 1878 on land donated by Jane Shaw and Thomas and Christopher Hull. An infants' school from 1892, it closed in 1925 and was replaced in 1930 by Marton Parish Church Hall which was built by Atherton Bros. Besides being used for Sunday School and other church and community activities, from 1930 to 2002 Marton Operatic Society performed Gilbert and Sullivan and other operas here. 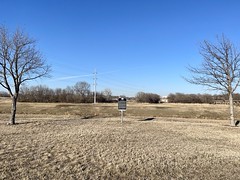 Daggett's Crossing Among the early settlers of Fort Worth, Charles Biggers (C.B.) Daggett (1812-1888) was born in Canada and moved to Indiana when he was eight years old. Around 1839–40, His family moved to Shelby County, Texas, where they participated in the Regulator–Moderator War. C.B. Daggett then fought in the U.S.-Mexico War. For his military service, he received a 320-acre land grant in Tarrant County which became the C.B. Daggett Survey. On his land situated north of the West Fork of the Trinity, Daggett farmed with his sons and maintained a small herd of cattle. Daggett and his sons also operated a ferry across the West Fork, near present-day Samuels Avenue and Cold Springs Road. It was one of only two across the river at the time, with the other being Eagle Ford Ferry in Dallas County. Local boosters claimed that Daggett's Ferry was superior, causing hundreds of immigrants and trail drivers in the late 1860s and early 1870s to bypass Dallas in favor of the Fort Worth crossing. C.B. Daggett reported that more than 40,000 cattle passed through annually during the 1870s. The operation of the ferry was carefully choreographed with teams of mules positioned on opposite riverbanks. Once the cargo or passengers were loaded on the ferry raft, ropes were thrown across the river to the mule skinner on the other side to then pull the ferry across, an entertaining sight according to reports. The ferry operated until 1877, when a bridge was built nearby to serve the community and region. Daggett's Crossing is remembered for its significance and heritage in the area's settlement, transportation and commerce. (2019)

English translation: This church sacred to the Nativity of Mary known as Masirano or the Serra, built in the early 1100s, enlarged in 1657, adorned with a bell tower and facade in 1899, restored in 1955 after the offenses of the war welcome in the peace of green silence to pray to the one who comforts your journey to the eternal with a mother's heart [AWS Translate]

English translation: In memory of the glorious Jewish Brigade. On April 12, 1945, after overwhelming the last German resistance on the Senio, the third “Palestine Regiment” battalion of the Jewish Brigade freed, after a fierce fight, La Serra, a locality of the municipality of Castel. Bolognese, from the Nazi-Fascist occupation. [AWS Translate] 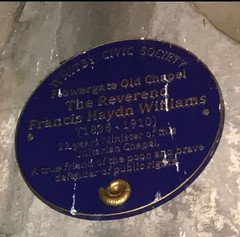 Flowergate Old Chapel The Reverend Francis Haydn Williams (1836 - 1910) 22 years Minister of this Unitarian Chapel. A true friend of the poor, and brave defender of public rights.