Homesite of Dr. Edgar William Brown. Following the example of his father Dr. Samuel M. Brown, Georgia native Edgar William Brown (1859-1917) became a practicing physician in Orange. In 1888 he married Carrie Launa Lutcher (1861-1941), daughter of the successful Orange lumberman Henry Jacob Lutcher. Brown, whose home was located at this site, became associated with the Lutcher timer enterprise in the development and management of the company's properties. He later took over as manager of the newly established Dibert, Stark and Brown Cypress Company operations in Louisiana. His success in the timber industry soon made him one of the leading lumbermen in the United States. In his later years Brown took an active interest in agriculture and was responsible for the clearing and cultivation of much area farmland. He also invested in the region's early oil production industry and directed various land development projects. Brown served for many years as mayor of Orange. An advocate of the city's commercial growth, he actively supported construction of a deep water port and the Intercoastal Canal. His early efforts were vital to Orange's development as a major center of shipping and trade. #11473 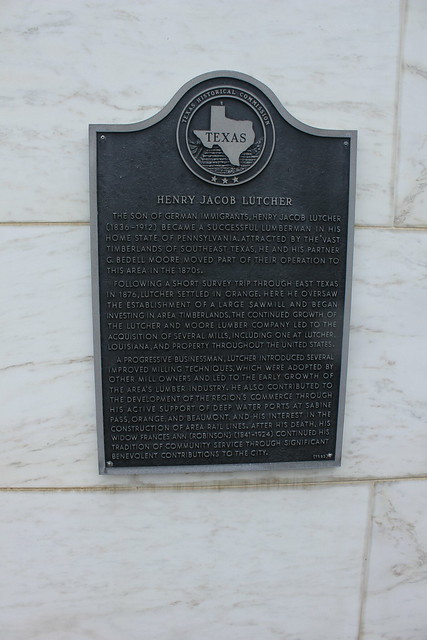