Elm Fork Bridge This historic bridge was an important two-way traffic bridge over the Elm Fork of the Trinity River for growing automobile traffic in Denton County in the 1920s. The bridge is one of the only two accessible iron and steel bridges in Denton County remaining in its orginal location on public land. Concrete piers and abutments were installed in early March 1922 while crews waited for the shipments of steel to arrive later that month. The main span of the bridge is a 100-foot Pratt through-truss; east and west approach spans are Warren pony trusses 70 feet in length. Early iron bridges could only accomodate one-way traffic. The Elm Fork bridge was built for two-way traffic in response to the growing number of automobiles on the roads. Built on one of the original wagon trails leading out of Denton, the road became known as Sherman Highway, connecting Denton, Aubrey and Sanger. It also served early farms and cattle ranches in the area; some were later inundated when the river was dammed. The bridge served traffic until 1990 when Sherman Highway (now FM 428) was widened and the bridge was bypassed. It was repurposed as a pedestrian bridge and reamins in its original location as a part of the Ray Roberts Lake State Park Greenbelt. The Greenbelt opened on National Trails Day in 1999 as a wilderness recreation area with a 20-mile multiuse trail that follows the banks of the Elm Fork of the Trinity River. Recorded Text Historic Landmark - 2014 Marker is Property of the State of Texas 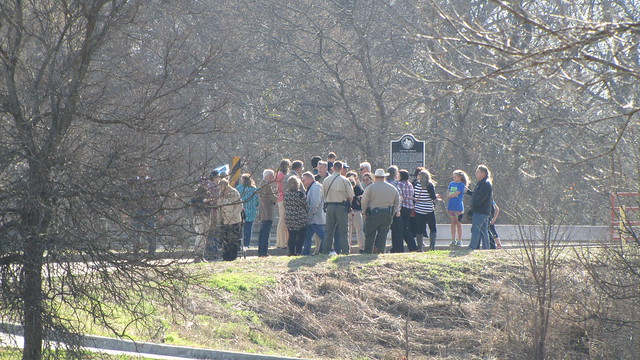