No. 1 British Flying Training School, By 1939, the British government recognized that in the event of war with Germany, training facilities would need to be established overseas in Commonwealth countries, or in the U.S. at civilian schools similar to those already utilized by the (then) U.S. Army Air Corps. In August 1941, prior to the U.S. entry into World War II, the No. 1 British Flying Training School (BFTS) of the Royal Air Force (RAF) was established with strong support from the citizenry of Terrell. Both the Terrell and Kaufman Chambers of Commerce assisted in locating a suitable location for the new training school. Following the naming of Major W.F. Long of Dallas as the operator of the school, a site was selected about one mile south of Terrell on the Bond and Patton farms. Terrell Aviation School opened shortly thereafter. In addition to the main field at the No. 1 BFTS, to ease congestion the school had two auxiliary fields to the south of Terrell on the Boykin and Tarver farms. Civilian instructors provided the cadets with 20 weeks of preparation that included both flight training and ground school classes that covered meteorology, airmanship, navigation, and 'link' trainers for instrument flying. During World War II the school trained approx. 2,200 cadets from the RAF and 138 U.S. Army Air Forces cadets. The motto of No. 1 BFTS was "the seas divide, but the skies unite". The people of Terrell welcomed cadets into their community and the cadets contributed their talents to the cultural life of the town. The war over, and their mission complete, on September 10, 1945, the final cadets left Terrell’s railroad station with a contingent of local citizens waving them on. In 2002, the No. 1 BFTS Museum opened in Terrell to commemorate not only the wartime school, but the continuing cooperation between the British Commonwealth and the United States in war and peace. #16688 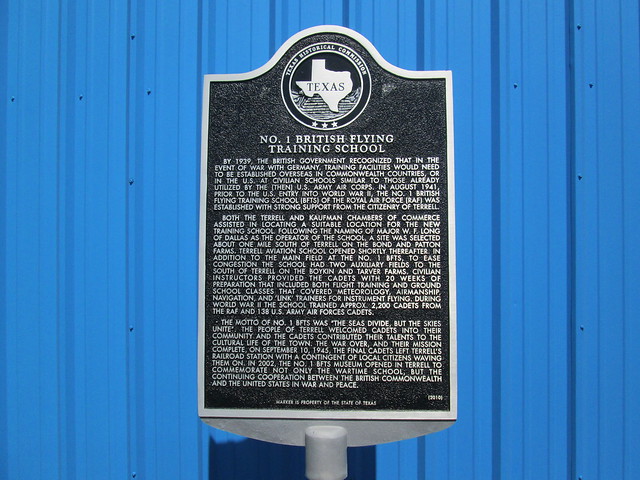