Santiago de Compostela,commonly known as Santiago (/ˌsæntiˈɑːɡoʊ/, Galician: [sanˈtiaɣo], Spanish: [sanˈtjaɣo]), is the capital of the autonomous community of Galicia in northwestern Spain. The city has its origin in the shrine of Saint James the Great, now the city's cathedral, as destination of the Way of St. James, a leading Catholic pilgrimage route originated in the 9th century. In 1985 the city's Old Town was designated a UNESCO World Heritage Site. 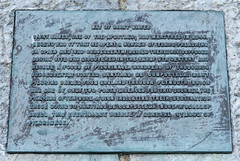 Way of Saint James Saint James, one of the Apostles, was martyred in AD44. Legend has it that he spent a number of years preaching in Spain and was subsequently buried there. His supposed burial site was discovered in the early 9th century and became a focus of pilgrimage. Hundreds of thousands subsequently visited Santiago de Compostela. Many pilgrims sailed from England through Plymouth which was one of the only two ports licences for this journey. The pilgrims often wore a sign indicating their destination Those going to Siantago de Compostela wore a scallop shell, this eventually became a general symbol of pilgrimage

The Barbican, Plymouth, United Kingdom where it was