So far, plaque hunters around the world have found, photographed, and curated 50776 plaques. Use the search box in the top-right corner, or browse plaques by person, place

We believe that the purpose of historical markers is to bring history alive. So we have made the data open. Anybody can use it to builds apps, charts, whatever they wish.
Read more 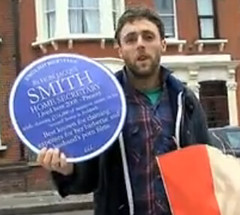 Plaque Of The Day

Jez says, "The 'Don't Panic' political group raised a few eyebrows with this stunt. Jacqui Smith had got into trouble over MP's expense claims" 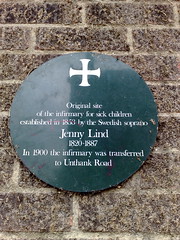 Place Of The Day

Norwich has a long history. It has been a city since 1094. From the Middle Ages until the Industrial Revolution, Norwich was the largest city in England after London and one of the most important. This is refelected in its plaques.

In the last 11 years, between 20 May 2009 to 6 Jan 2021, Open Plaques had 4,530,517 page views from 1,234,480 users. Some were triggered by internet memes such as Steve Ullathorne's 2012 image of a George Orwell plaque with a CCTV camera next to it. Others, such as those for Alan Turing, were probably triggered by an anniversary and campaign for recognition. 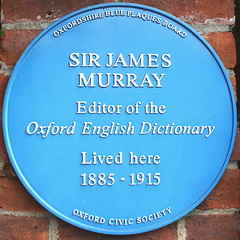 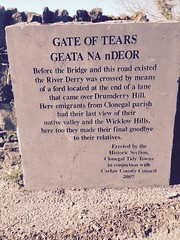 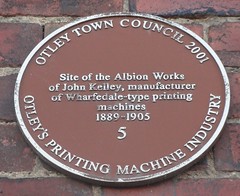 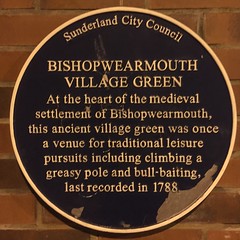 Jourdanton. In 1909, Jourdan Campbell (1867-1938) and Theodore H. Zanderson (1854-1927) established the Jourdanton community, named for Campbell, on the eastern edge of their Toby Ranch property. Jourdan Campbell was born in Atascosa County, and was a merchant and county commissioner. He first met Zanderson, a Dane whose significant business interests centered on wool and mohair, in San Antonio. The two entrepreneurs convinced Dr. Charles Franklin Simmons, a land speculator who had previously worked with Campbell, to lay rail through the new townsite; the first train came through Jourdanton on September 4, 1909. Jourdanton soon had utilities, a bank, a newspaper (The Atascosa Monitor), a post office and several businesses. The community also had a school, several churches and a cemetery. Residents, encouraged by the settlement's rapid growth, and led by newspaper owner Ralph Roy "Railroad" Smith, began to promote the idea of Jourdanton becoming county seat. In 1910, Atascosa County residents voted that the county seat be moved from Pleasanton to Jourdanton. In 1911, the town incorporated, and by 1914, it had two railroads and the population had doubled. Many residents were farmers or ranchers. By the 1940s, oil and natural gas reserves were discovered nearby, which led to another period of growth; later, the discovery and mining of lignite to the south also helped sustain Jourdanton's economy. The town grew further with the additions of the Smith Village and Atascosa Estates developments. Although the railroads stopped running by the 1960s, Jourdanton continued to grow, and remains a community rich in culture, heritage and diversity. (2009) #15743

Gate Of Tears Geata Na nDeor before the bridge and this road existed the River Derry was crossed by means of a ford located at the end of a lane that came over Drumderry Hill. Here emigrants from Clonegal parish had their last view of their native valley and the Wicklow Hills, here too they made their final goodbye to their relatives.

Site of the Albion Works of John Kelley, manufacturer of Wharfedale-type printing machines 1889-1905

Bishopwearmouth Village Green. At the heart of the medieval settlement of Bishopwearmouth, this ancient village green was once a venue for traditional leisure pursuits including climbing a greasy pole and bull-bating, last recorded in 1788.

Stephenville Drug Stores. Local drug stores were an important and essential part of the economy and well-being of early Texas towns. This site at the corner of Washington and Belknap streets served as the location of a series of Stephenville drug stores from 1899 until 1994. The original proprietor was F. A. Schnabel, who contracted for this building to be built in October 1897, and hauled the brick for the building from the new brick plant in nearby Thurber. Schnabel operated the business until 1905, when he sold it to Frank S. White. Subsequent owners of the pharmacy were Swan Richardson, Daniel and Louise D'Arcy, Bill Riddick, John Baker, and finally, Eckerd Drug Company. (2009) #15760

Florence White 1886-1961, resident of Scholemoor, Bradford, and successful national campaigner on women's pensions during the 1930's, held her first of many campaign meetings at the Mechanics Institute.