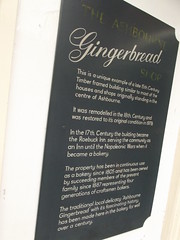 The Ashbourne Gingerbread Shop This is a unique example of a late 15th century Timber framed building similar to most of the houses and shops originally standing in the centre of Ashbourne. It was remodelled in the 18th Century and was restored to its original condition in 1979. In the 17th Century the building became the Roebuck Inn, serving the community as an Inn until the Napoleonic Wars when it became a bakery. The property has been in continuous use as a bakery since 1805 and has been owned by succeeding members of the present family since 1887 representing four generations of craftsman bakers. The traditional local delicacy "Ashbourne Gingerbread" with it's fascinating history, has been made here in the bakery for well over a century.

The Ashbourne Gingerbread Shop - 26 St John Street, Ashbourne, United Kingdom where it was remodelled (1701), was restored to its original condition (1979), and used as a bakery (1805)