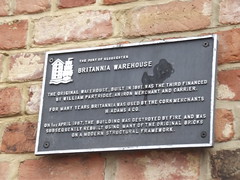 Britannia Warehouse The original warehouse, built in 1861, was the third financed by William Partridge, an iron merchant and carrier. For many years Britannia was used by the corn merchants H. Adams & co. On 1st April 1987, the building was destroyed by fire and was subsequently rebuilt using many of the original bricks on a modern structural framework.