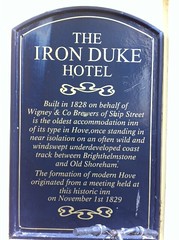 The Iron Duke Hotel. Built in 1828 on behalf of Wigney & Co Brewers of Ship Street is the oldest accommodation inn of its type in Hove, once standing in near isolation on an often wild and windswept underdeveloped coast track between Brighthelmstone and Old Shoreham. The formation of modern Hove originated from a meeting held at this historic inn on November 1st 1829