The Indoor League was a pub games competition series that was produced by Yorkshire Television and aired from 1972 until 1977. The programme was hosted by England cricketer Fred Trueman. The first series (1972) aired only in the Yorkshire Television region, before series 2-6 were aired across Britain on the ITV network from 1973 to 1977. Trueman often wore a cardigan whilst smoking a pipe throughout his links. He always ended the show with the phrase, "ah'll see thee". The show featured many indoor games, the majority of which were pub games, each of which had a prize of £100 for the competition winners. The sports included darts, pool, bar billiards, bar skittles, Table football (aka foosball), arm wrestling and shove ha'penny amongst others. Among the commentators was Dave Lanning and Keith Macklin. The Indoor League was created by Sid Waddell, who also produced the series from 1972 to 1976. Darts coverage on television was in its infancy, with the News of the World Darts Championship having just begun to be broadcast on ITV in 1972. Waddell would later go on to become one of the voices of darts on television when the World Championship was created in 1978. The memorable, if rather incongruous, theme music to the programme was an instrumental version of Waiting for You, a 1967 single by Belgian organist André Brasseur. In 2006, a DVD of the first series of The Indoor League was released by Network DVD. 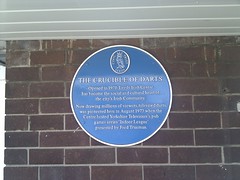 The Irish Centre, York Road, Leeds, United Kingdom where it was filmed (1973)