woman, folk dance revivalist, and Commander of the Most Excellent Order of the British Empire

Mary Neal CBE (5 June 1860 – 22 June 1944), born Clara Sophia Neal, was an English social worker and collector of English folk dances. Neal was born in Edgbaston, Birmingham, to a prosperous family. Her father was David Neal, a button manufacturer. In 1888, she began voluntary social work with the West London Methodist Mission of Hugh Price Hughes, helping the poor of Soho, Fitzrovia, and Marylebone in London, taking the name "Sister Mary". She set up and ran a "Club for Working Girls" at the mission's Cleveland Hall, and also wrote for the Mission Magazine. According to Emmeline Pethick, who worked with her in the Girl's Club, she had "a strong sense of humour and a profound aversion from unreality; she had also a sharp tongue". She said of the Girls' Club, No words can express the passionate longing which I have to bring some of the beautiful things of life within easy reach of the girls who earn their living by the sweat of their brow... If these Clubs are up to the ideal which we have in view, they will be living schools for working women, who will be instrumental in the near future, in altering the conditions of the class they represent. The Girls' Club was a great success, but in the autumn of 1895, Neal and Pethick left the mission to set up their own Espérance Club for girls in Cumberland Market. They wanted to escape from the mission's institutional constraints and to experiment with dance and drama. They also started the Maison Espérance tailoring establishment to provide employment. In 1905, Neal met Cecil Sharp at the Hampstead Conservatoire. They began to collaborate during a revival of English folk music, in which Neal felt that the working girls of London would be able to reclaim their heritage. The girls of the Espérance Club became in demand as teachers of folk music in London and further afield and they also put on several public performances in London. Neal and Lily Montagu, who sponsored a club for Jewish working girls, bought a house in Littlehampton, Sussex, in 1925 and called it "Green Bushes". They made it a holiday home for girls. Neal also went to the United States between 1910 and early 1912 to promote folk dancing. Neal became a socialist, following Keir Hardie and Edward Carpenter. In 1899, she attended the London International Congress of Women. In 1906, Neal and Emmeline Pethick-Lawrence went to a meeting in the Chelsea home of Sylvia Pankhurst, where the Women's Social and Political Union (WSPU) was established. She joined the WSPU, and later the United Suffragists. Neal was a leading member of the Kibbo Kift youth organisation.She was a justice of the peace in West Sussex in 1934, dealing with child delinquency. She also became a member of the Howard League for Penal Reform. Her services to the English folk song and dance movement led to her being appointed Commander of the Order of the British Empire (CBE) in 1937. 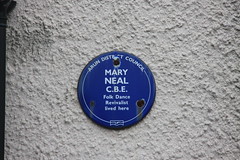 St. Flora's Road, Littlehampton, United Kingdom where they was