Robert Hyde Greg (24 September 1795 – 21 February 1875), was an English industrialist, economist and antiquary. Born in Manchester, the son of Samuel Greg, the creator of Quarry Bank Mill, he was brother to William Rathbone Greg and the junior Samuel Greg. His mother, Hannah, was a descendant of Philip Henry. He attended the University of Edinburgh and, after the obligatory Grand Tour of the antiquities of Continental Europe, joined his father's textile manufacturing enterprise. He was active in Manchester intellectual life as a member of the Manchester Literary and Philosophical Society and was a founder of the Mechanics' Institute. He was an active member of the Liberal Party and the Anti-Corn Law League. Though he was elected to Parliament for Manchester in 1839, it was without his consent and he resigned in the following year. He was an opponent of factory reform, trades unions and worker health and safety legislation. He died at Norcliffe Hall, Styal, Cheshire and is buried at the Dean Row Unitarian Chapel, Wilmslow. 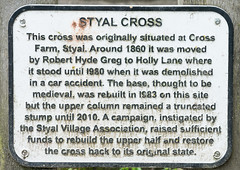 Styal Cross This cross was originally situated at Cross Farm, Styal. Around 1860 it was moved by Robert Hyde Greg to Holly Lane where is stood until 1980 when it was demolished in a car accident. The base, thought to be medieval, was built in 1983 on this site but the upper column remained a truncated stump until 2010. A campaign, instigated by the Styal Village Association, raised sufficient funds to rebuilt the upper half and restore the cross back to its original state.

Styal, Styal, United Kingdom where they was