Swinton Lions RLFC is an English semi-professional rugby league club from Swinton, Greater Manchester. The club has won the Championship six times and three Challenge Cups. From 2016, Swinton Lions will compete in the Kingstone Press Championship, the second tier of European rugby league (behind Super League), after winning promotion from League 1. Prior to the 1996 season, the club was known simply as Swinton. 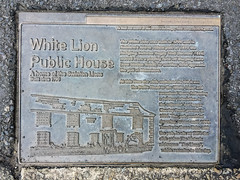 White Lion Public House A home of the Swinton Lions Built circa 1790 The White Lion was built in 1790 and is Swinton's fourth oldest pub. In 1873 the fledgling Swinton Rugby Club (formed 1866) moved from a playing off Burying Lane (now Station Road), to another field opposite the pub at Stoneacre. At this time the club switched its HQ from the Bull's Head to the White Lion, and remained there following a further relocation to the adjacent but larger Chorley Road ground in 1886. The pub provided dressing rooms until 1898. Thanks to these links with the pub, in about 1874 the club gained its historic nickname "The Lions" which remains to this day

Worsley Road, Swinton, United Kingdom where it was