William Harrison Ainsworth (4 February 1805 – 3 January 1882) was an English historical novelist born in Manchester. He trained as a lawyer, but the legal profession held no attraction for him. While completing his legal studies in London he met the publisher John Ebers, at that time manager of the King's Theatre, Haymarket. Ebers introduced Ainsworth to literary and dramatic circles, and to his daughter, who became Ainsworth's wife. Ainsworth briefly tried the publishing business, but soon gave it up and devoted himself to journalism and literature. His first success as a writer came with Rookwood in 1834, which features Dick Turpin as its leading character. A stream of 39 novels followed, the last of which appeared in 1881. Ainsworth died in Reigate on 3 January 1882.

Wm. Harrison Ainsworth 1805-1883 novelist was born in a house which stood on this site.
Manchester, United Kingdom 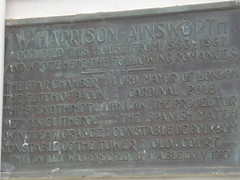 Wm. Harrison Ainsworth 1805-1883 novelist was born in a house which stood on this site.

King Street, Manchester, United Kingdom where they was born (1805)

W. Harrison Ainsworth occupied this house from 1853-1867 and wrote the following romances: The Star Chamber; Lord Mayor of London; The Flitch of Bacon; Cardinal Pole; The Spendthrift; John Law. The Projector; Mervyn Clitheroe; The Spanish Match; Ovingdean Grange; Constable De Bourbon; Constable of the Tower; Old Court This tablet was erected by C.A.Bleckly. 1910