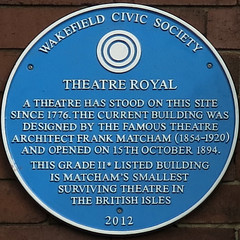 Theatre Royal. A Theatre has stood on this site since 1776. The current building was designed by the famous theatre architect Frank Matcham (1854-1920) and opened on 15th October 1894. This Grade II* Listed Building is Matcham's smallest surviving theatre in the British Isles