Needham Market railway station is on the Great Eastern Main Line (GEML) in the East of England, serving the town of Needham Market, Suffolk. It is 77 miles 7 chains (124.1 km) down-line from London Liverpool Street and is situated between Ipswich to the south and Stowmarket to the north. Its three-letter station code is NMT. The station is currently operated by Abellio Greater Anglia, which also runs all trains serving the station. It sees regular services between Ipswich and Stowmarket, whereafter trains branch off to Cambridge via the Ipswich to Ely Line. 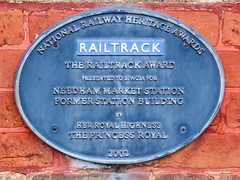 Needham Market Railway Station Originally named Needham, the station was opened by the Ipswich, Bury & Norwich Railway in 1846, although the building was not complete until 1849. The Railway was managed and later taken over by the Great Eastern Railway. The station was designed by Frederick Barnes, architect, of Ipswich and built by Daniel Revitt, contractor, of Stowmarket. Closed in 1967, the station was reopened and named Needham Market in 1971. It was restored in 2000. The building is listed Grade II and stands in a Conservation Area.

Station Yard, Needham Market, United Kingdom where it was

Station Yard, Needham Market, United Kingdom where it was