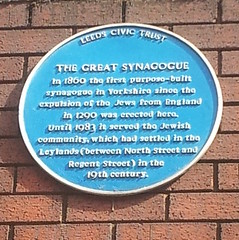 The Great Synagogue In 1860 the first purpose-built Synagogue in Yorkshire since the expulsion of the Jews from England in 1290 was erected here. Until 1983 it served the Jewish community, which had settled in the Leylands (between North Street and Regent Street) in the 19th century.