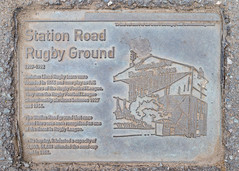 Station Road Rugby Ground 1929-1992 Swinton Lions Rugby team were founded in 1866 and now play as full members of the Rugby Football League. They won the Rugby Football League Championship six times between 1927 and 1964. The Station Road ground that once stood here was once recognised as on of the finest in Rugby League. In its heyday, it boasted a capacity of 60,000. 44,621 attended the semi cup final in 1951.

Station Road, Swinton, United Kingdom where it was