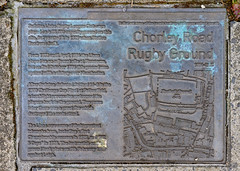 Chorley Road Rugby Ground 1886-1925 Swinton Lions Rugby League Club once played on a 25,000 capacity ground on this site, but vacated it in 1929 when Station Road was built. From 1873 until April 1886 the Lions played on an adjacent site at Stoneacre, but on 2nd October 1886 this ground was opened with a victory over Manchester. After Swinton defeated Salford 16-8 in the 1900 Challenge Cup Final at Fallowfield, a torchlight procession welcomed the players back to the ground. Two years later there was a great fire which destroyed the main stand. The lions saw some of their greatest triumphs here, including a first Championship success in 1927, and “All 5 Cups” in 1928. The last match on the ground took place on 9th February 1929 against Leigh.

Victoria Avenue, Swinton, United Kingdom where it was