Arthur "Harpo" Marx (born Adolph Marx; November 23, 1888 – September 28, 1964) was an American comedian, actor, mime artist, and musician, and the second-oldest of the Marx Brothers. In contrast to the mainly verbal comedy of his brothers Groucho Marx and Chico Marx, Harpo's comic style was visual, being an example of both clown and pantomime traditions. He wore a curly reddish blond wig, and never spoke during performances (he blew a horn or whistled to communicate). He frequently used props such as a horn cane, made up of a pipe, tape, and a bulbhorn, and he played the harp in most of his films. 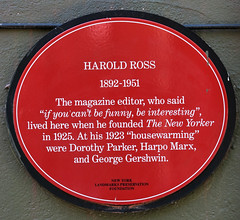 Harold Ross 1892-1951 The magazine editor, who said "if you can't be funny, be interesting", lived here when he founded The New Yorker in 1925. At his 1923 "housewarming" were Dorothy Parker, Harpo Marx, and George Gershwin.