Cecil Blount DeMille (/dəˈmɪl/; August 12, 1881 – January 21, 1959) was an American filmmaker. Between 1913 and 1956, he made seventy features, both silent and sound films. He is acknowledged as a founding father of the Hollywood film industry, and the most commercially successful producer-director in cinema history. His films were distinguished by their epic scale and by his cinematic showmanship. He made silent films of every genre: social dramas, comedies, Westerns, farces, morality plays, and historical pageants. DeMille began his career as a stage actor in 1900. He later moved to writing and directing stage productions, some with Jesse Lasky, who was then a vaudeville producer. DeMille's first film, The Squaw Man (1914), was also the first feature film shot in Hollywood. Its interracial love story made it a phenomenal hit and it "put Hollywood on the map." The continued success of his productions led to the founding of Paramount Pictures with Lasky and Adolph Zukor. His first biblical epic, The Ten Commandments (1923), was both a critical and financial success; it held the Paramount revenue record for twenty-five years. In 1927 he directed The King of Kings, a biography of Jesus Christ, which was acclaimed for its sensitivity and reached more than 800 million viewers. The Sign of the Cross (1932) was the first sound film to integrate all aspects of cinematic technique. Cleopatra (1934) was his first film to be nominated for the Academy Award for Best Picture. After more than thirty years in Hollywood, DeMille reached the pinnacle of his career with Samson and Delilah (1949), a biblical epic which did "an all-time record business." Along with biblical and historical narratives, he also directed films oriented toward "neo-naturalism," which tried to portray the laws of man fighting the forces of nature. He went on to receive his first nomination for the Academy Award for Best Director for his circus drama The Greatest Show on Earth (1952), which won the Academy Award for Best Picture. His last and most famous film, The Ten Commandments (1956), is currently the seventh highest-grossing film of all-time adjusted for inflation. In addition to his Best Picture Award, he received an Academy Honorary Award for his film contributions, the Palme d'Or (posthumously) for Union Pacific, a DGA Award for Lifetime Achievement, and the Irving G. Thalberg Memorial Award. He was also the first recipient of the Golden Globe Cecil B. DeMille Award, which was later named in his honor. 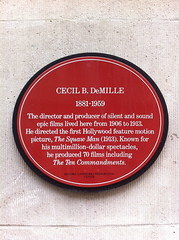 Cecil B. DeMille 1881-1959 The director and producer of silent and sound epic films lived here from 1906 to 1913. He directed the first Hollywood feature motion picture, The Squaw Man (1913). Known for his multimillion-dollar spectacles, he produced 70 films including The Ten Commandments.