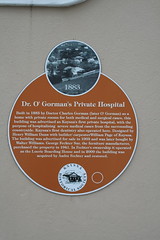 1883. Dr. O' Gorman's Private Hospital. Built in 1883 by Doctor Charles Gorman (later O’ Gorman) as a home with private rooms for both medical and surgical cases, this building was advertised as Knysna’s first private hospital, with the purpose of hospitalising severe medical cases from the surrounding countryside. Knysna’s first dentistry also operated here. Designed by Henry William Dunn with builder/ carpenter William Page of Knysna. The building was advertised for sale in 1903 and was later bought by Walter Williams. George Fechter Snr, the furniture manufacturer, purchased the property in 1941. In Fechter’s ownership it operated as the Loerie Boarding House and in 2009 the building was acquired by Andre Fechter and restored.