William Parker, 13th Baron Morley, 4th Baron Monteagle (1575 – 1 July 1622) was an English peer, best known for his role in the discovery of the Gunpowder Plot. In 1605 Parker was due to attend the opening of Parliament. He was a member of the House of Lords as Lord Monteagle, the title on his mother's side. He received a letter; it appears that someone, presumably a fellow Catholic, was afraid he would be blown up. The so-called Monteagle letter survives in the National Archives (SP 14/216/2), but its origin remains mysterious. 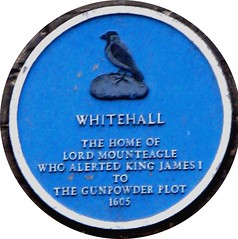