(Not to be confused with Leo Bloom.) Leopold Bloom is the fictional protagonist and hero of James Joyce's Ulysses. His peregrinations and encounters in Dublin on 16 June 1904 mirror, on a more mundane and intimate scale, those of Ulysses/Odysseus in Homer's epic poem the Odyssey. The character was inspired by James Joyce's close friend Aron Ettore Schmitz (Italo Svevo), author of Zeno's Conscience. Bloom is introduced to the reader as a man of appetites: Mr Leopold Bloom ate with relish the inner organs of beasts and fowls. He liked thick giblet soup, nutty gizzards, a stuffed roast heart, liverslices fried with crustcrumbs, fried hencods' roes. Most of all he liked grilled mutton kidneys which gave to his palate a fine tang of faintly scented urine. The Bloom character, born in 1866, is the only son of Rudolf Virág (a Hungarian Jew from Szombathely who emigrated to Ireland, converted from Judaism to Protestantism, changed his name to Rudolph Bloom and later committed suicide), and of Ellen Higgins, an Irish Protestant. He is uncircumcised. They lived in Clanbrassil Street, Portobello. Bloom converted to Catholicism to marry Marion (Molly) Tweedy on 8 October 1888. The couple have one daughter, Millicent (Milly), born in 1889; their son Rudolph (Rudy), born in December 1893, died after 11 days. The family live at 7 Eccles Street in Dublin. Episodes (chapters) in Ulysses relate a series of encounters and incidents in Bloom's contemporary odyssey through Dublin in the course of the single day of 16 June 1904 (although episodes 1 to 3, 9 and to a lesser extent 7, are primarily concerned with Stephen Dedalus, who in the plan of the story is the counterpart of Telemachus). Joyce aficionados celebrate 16 June as 'Bloomsday'. As the day unfolds, Bloom's thoughts turn to the affair between Molly and her manager, Hugh 'Blazes' Boylan (obliquely, through, for instance, telltale ear worms), and, prompted by the funeral of his friend Paddy Dignam, the death of his child, Rudy. The absence of a son may be what leads him to take a shine to Stephen, for whom he goes out of his way in the book's latter episodes, rescuing him from a brothel, walking him back to his own house and even offering him a place there to study and work. The reader becomes familiar with Bloom's tolerant, humanistic outlook, his penchant for voyeurism and his (purely epistolary) infidelity. Bloom detests violence, and his relative indifference to Irish nationalism leads to disputes with some of his peers (most notably 'the Citizen' in the Cyclops chapter). Although Bloom has never been a practising Jew, converted to Roman Catholicism to marry Molly, and has in fact received Christian baptism on three different occasions, he is of partial Jewish descent and is sometimes ridiculed and threatened because of his being perceived as a Jew. 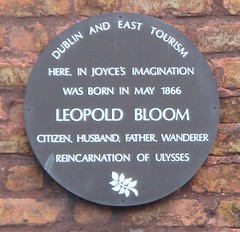