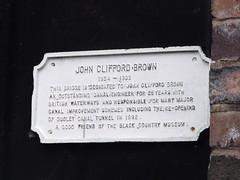 John Clifford Brown 1934 - 1993 This bridge is dedicated to John Clifford Brown an outstanding canal engineer for 25 years with British Waterways and responsible for many major canal improvement schemes including the re-opening of Dudley Canal Tunnel in 1992. A good friend of the Black Country Museum.