The Stratford-upon-Avon Canal is a canal in the south Midlands of England. The canal, which was built between 1793 and 1816, runs for 25.5 miles (41.0 km) in total, and consists of two sections. The dividing line is at Kingswood Junction, which gives access to the Grand Union Canal. Following acquisition by a railway company in 1856, it gradually declined, the southern section being un-navigable by 1945, and the northern section little better. The northern section was the setting for a high-profile campaign by the fledgling Inland Waterways Association in 1947, involving the right of navigation under Tunnel Lane bridge, which required the Great Western Railway to jack it up in order to allow boats to pass. These actions saved the section from closure. The southern section was managed by the National Trust from 1959, and restored by David Hutchings and the Stratford Canal Society between 1961 and 1964, after an attempt to close it was thwarted. The revived canal was re-opened by Queen Elizabeth the Queen Mother, and responsibility for it was transferred to British Waterways in 1988. 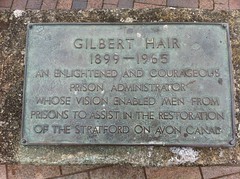 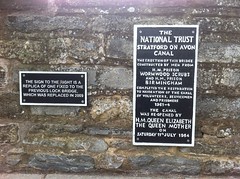 Stratford on Avon Canal The erection of this bridge constructed by men from H.M. Prison Wormwood Scrubs and H.M. Prison Birmingham. Completed the restoration to navigation of the canal by volunteers, servicemen and prisoners 1961-4. The canal was re-opened by H.M. Queen Elizabeth the Queen Mother on Saturday 11th July 1964

Avon Lock - Bancroft Basin, Stratford-upon-Avon, United Kingdom where it was