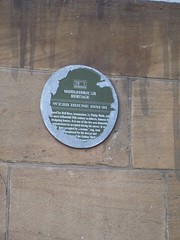 Webb House 1881-91 Designed for Bell Bros, ironmakers, by Philip Webb, one of the most influential 19th century architects, famous for designing houses. It is one of the few non-domestic commissions he accepted during his career. It was later occupied by Dorman Long, best remembered for the design and ? of the the Sydney Harbour ? Australia [full inscription unknown]

Webb House, Middlesbrough, United Kingdom where they was