Sherborne is a market town and civil parish in north west Dorset, in South West England. It is sited on the River Yeo, on the edge of the Blackmore Vale, 6 miles (10 kilometres) east of Yeovil. The A30 road, which connects London to Penzance, runs through the town. In the 2011 census the population of Sherborne parish and the two electoral wards was 9,523. 28.7% of the population is aged 65 or older. Sherborne's historic buildings include Sherborne Abbey, its manor house, independent schools, and two castles: the ruins of a 12th-century fortified palace and the 16th-century mansion known as Sherborne Castle built by Sir Walter Raleigh. Much of the old town, including the abbey and many medieval and Georgian buildings, is built from distinctive ochre-coloured ham stone. The town is served by Sherborne railway station. 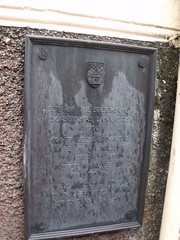 Site of the Sherborne & Dorsetshire Bank circa 1750. Continued during the late 18th and early 19th centuries by Simon Pretor a grocer of this town. Amalgamated with the National Provincial Bank of England in 1843.