John Maclean (24 August 1879 – 30 November 1923) was a Scottish schoolteacher and revolutionary socialist of the Red Clydeside era. He was notable for his outspoken opposition to the First World War, which caused his arrest under the Defence of the Realm Act and loss of his teaching post, after which he became a full-time Marxist lecturer and organiser. In April 1918 he was arrested for sedition, and his 75-minute speech from the dock became a celebrated text for Scottish left-wingers. He was sentenced to five years' penal servitude, but was released after the November armistice. Maclean believed that Scottish workers were especially fitted to lead the revolution, and talked of "", inspired by clan spirit. But his launch of a Scottish Workers Republican Party and a Scottish Communist Party were largely unsuccessful. Although he had been appointed Bolshevik representative in Scotland, he was not in harmony with the Communist Party of Great Britain, even though it had absorbed the British Socialist Party, to which he had belonged. In captivity, Maclean had been on hunger strike, and prolonged force-feeding had permanently affected his health. He collapsed during a speech and died of pneumonia, aged forty-four. 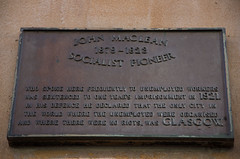 John Maclean 1879 - 1923 socialist pioneer who spoke here frequently to unemployed workers was sentenced to one year's imprisonment in 1921. In his defence he declared that the only city in the world where the unemployed were organised and where there were no riots was Glasgow.