founder of The National Land League (from 1879)

Michael Davitt (25 March 1846 – 30 May 1906) was an Irish republican activist for a variety of causes, especially Home Rule and land reform. Following an eviction when he was four years old, Davitt's family emigrated to England. He began his career as an organiser of the Irish Republican Brotherhood, which resisted British rule in Ireland with violence. Convicted of treason felony for arms trafficking in 1870, he served seven years in prison. Upon his release, Davitt pioneered the New Departure strategy of cooperation between the physical-force and constitutional wings of Irish nationalism on the issue of land reform. With Charles Stewart Parnell, he co-founded the Irish National Land League in 1879, in which capacity he enjoyed the peak of his influence before being jailed again in 1881. Davitt travelled widely, giving lectures around the world, supported himself through journalism, and served as Member of Parliament (MP) for the Irish Parliamentary Party (IPP) during the 1890s. When the party split over Parnell's divorce, Davitt joined the anti-Parnellite Irish National Federation. His Georgist views on the land question put him on the left wing of Irish nationalism, and he was a vociferous advocate of alliance between the Radical faction of the Liberal Party and the IPP. 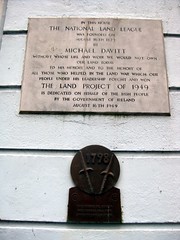 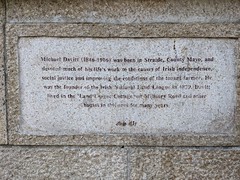 In this house The National Land League was founded on August 16th 1879 by Michael Davitt without whose life and work we would not own our own land today. To his memory and to the memory of all those who helped in the Land War which our people under his leadership fought and won. The Land Project of 1949 is dedicated on behalf of the Irish people by the government of Ireland

Daly's Hotel, The Mall, Castlebar, Ireland where they founded the National Land League (1879)

Michael Davitt (1846-1906) was born in Straide, County Mayo, and devoted much of his life's work to the cause of Irish Independence, social justice and improving the conditions of the tenant farmer. He was the founder of the Irish National Land League in 1879. Davitt lived in the 'Land League Cottage' on Military Road, and other houses in this area for many years.