Arthur Melbourne Cooper (15 April 1874 – 28 November 1961) was a British photographer and early filmmaker best known for his pioneering work in stop-motion animation. He produced over three hundred films between 1896 and 1915, of which an estimated 36 were all or in part animated. These include Dreams of Toyland (1908) and according to some sources Dolly’s Toys (1901), as well as Matches: An Appeal (date disputed), which Dutch independent researcher Tjitte de Vries has claimed may have been the first animated film to be shown in public. Since his death, Cooper has become a controversial figure among film historians with disputes arising over his professional relationship with film pioneer Birt Acres; seven films known as the GRG-Series, which archives such as the BFI's currently credit to Brighton-based filmmaker George Albert Smith; and the re-dating of the aforementioned Matches: An Appeal, which archives such as the BFI's currently date to 1914. The claims were debated in a series of articles in Film History journal from 1999 to 2002, and in response to the book on Cooper published in 2009 by de Vries. 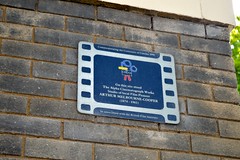