The Oceanic Steam Navigation Company, more commonly known as the White Star Line (WSL), was a British shipping company. Founded out of the remains of a defunct packet company, it gradually rose up to become one of the most prominent shipping lines in the world, providing passenger and cargo services between the British Empire and the United States. While many other shipping lines focused primarily on speed, White Star branded their services by focusing more on providing comfortable passages for both upper class travellers and immigrants. Today, it is remembered for the innovative vessel Oceanic and for the losses of some of their best passenger liners, including the wrecking of the Atlantic in 1873, the sinking of the Republic in 1909, the infamous loss of the Titanic in 1912 and the wartime sinking of HMHS Britannic in 1916. Despite its casualties, the company retained a prominent hold on shipping markets around the globe before falling into decline during the Great Depression, which ultimately led to a merger with its chief rival, Cunard Line, which operated as Cunard-White Star Line until 1950, when Cunard purchased White Star's share in the joint company. Cunard Line then operated as a separate entity until 2005 and is now part of Carnival Corporation & plc. As a lasting reminder of the White Star Line, modern Cunard ships use the term White Star Service to describe the level of customer care expected of the company. 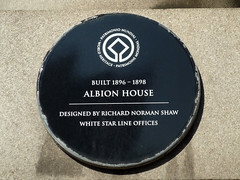 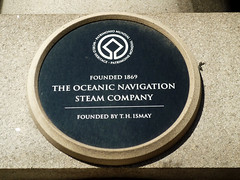 Albion House 30 James Street, Liverpool, United Kingdom where it was (1869)

CANUTE CHAMBERS This building housed the offices of The White Star Shipping Company, owners of RMS Titanic which sank on April 15th 1912 after striking an iceberg on her maiden voyage. It was here that hundreds of local people waited for news of their loved ones. 549 Southampton people died in the disaster.