Richard Cantillon (French: [kɑ̃tijɔ̃]; 1680s – May 1734) was an Irish-French economist and author of Essai Sur La Nature Du Commerce En Général (Essay on the Nature of Trade in General), a book considered by William Stanley Jevons to be the "cradle of political economy". Although little information exists on Cantillon's life, it is known that he became a successful banker and merchant at an early age. His success was largely derived from the political and business connections he made through his family and through an early employer, James Brydges. During the late 1710s and early 1720s, Cantillon speculated in, and later helped fund, John Law's Mississippi Company, from which he acquired great wealth. However, his success came at a cost to his debtors, who pursued him with lawsuits, criminal charges, and even murder plots until his death in 1734. Essai remains Cantillon's only surviving contribution to economics. It was written around 1730 and circulated widely in manuscript form, but was not published until 1755. His work was translated into Spanish by Gaspar Melchor de Jovellanos, probably in the late 1770s, and considered essential reading for political economy. Despite having much influence on the early development of the physiocrat and classical schools of thought, Essai was largely forgotten until its rediscovery by Jevons in the late 19th century. Cantillon was influenced by his experiences as a banker, and especially by the speculative bubble of John Law's Mississippi Company. He was also heavily influenced by prior economists, especially William Petty. Essai is considered the first complete treatise on economics, with numerous contributions to the science. These contributions include: his cause and effect methodology, monetary theories, his conception of the entrepreneur as a risk-bearer, and the development of spatial economics. Cantillon's Essai had significant influence on the early development of political economy, including the works of Adam Smith, Anne Turgot, Jean-Baptiste Say, Frédéric Bastiat and François Quesnay. 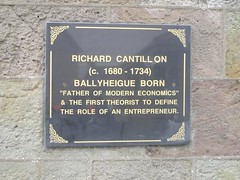 Richard Cantillon (c. 1680 - 1734) Ballyheigue born "father of modern economics" and the first theorist to define the role of an entrepreneur.

Ballyheigue Castle, Co. Kerry, Ballyheigue, Ireland where they was born near (1680)