Dame Sarah Joanne Storey, DBE (born 26 October 1977), is a British road and track racing cyclist and former swimmer, multiple gold medal winner at the Paralympic Games in both sports, and three times British (able-bodied) national track champion. Her total of fourteen gold medals puts her ahead of Tanni Grey-Thompson and Dave Roberts as the most successful British Paralympian of the modern era (but still behind Mike Kenny in the all-time list). Storey's list of major achievements also include being a 27-time World champion (5 in swimming and 22 in cycling), a 21-time European champion (18 in swimming and 3 in cycling) and holding 72 world records. 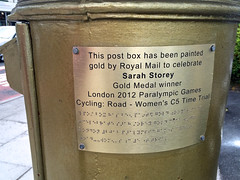 258 Eccles Old Road, Eccles, United Kingdom where they was