Grandview Heights Historic District In response to the heavy influx of new residents into South Florida at the turn of the century and the introduction of the automobile, local developers and real estate agents purchased the less expensive land outside of the West Palm Beach downtown area and developed the first speculative suburbs. Platted in the 1910-1920s as three subdivisions, Grandview Heights is one of the earliest attempts at southwestern expansion of the city. Originally stretching from Okeechobee Boulevard to Park Place, the property was chosen because of the relatively steep topography of South Florida. It was considered a desirable place to live because it was less than a mile from downtown, within close proximity to the City Terminals, West Palm Beach Canal, the Turning Basin, and had a view of the Everglades. Built for working and middle class residents, the quickly constructed homes were well made but affordable. The neighborhood consists of primarily Bungalow type homes that reflect mainly the Craftsman and Mission styles, both widely popular during the 1920s Florida Land Boom Era. 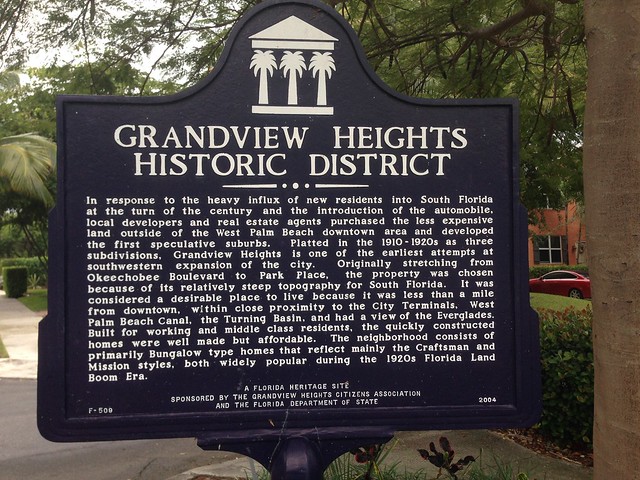 by Grandview Heights Citizen Association and the Florida Department of State