Hồ Chí Minh (/hoʊ tʃiː mɪn/; Vietnamese: [hò cǐ mīŋ̟], Saigon: [hò cǐ mɨ̄n]; Chữ Hán: 胡志明; 19 May 1890 – 2 September 1969), born Nguyễn Sinh Cung, also known as Nguyễn Tất Thành, Nguyễn Ái Quốc, Bác Hồ, or simply Bác ('Uncle', pronounced [ʔɓaːk̚˦˥]), was a Vietnamese revolutionary and politician. He served as Prime Minister of Democratic Republic of Vietnam from 1945 to 1955 and President from 1945 until his death in 1969. Ideologically a Marxist–Leninist, he served as Chairman and First Secretary of the Workers' Party of Vietnam. He was born in Nghệ An province, in Central Vietnam. Hồ Chí Minh led the Việt Minh independence movement from 1941 onward. It was supposed to be an umbrella group for all parties fighting for Vietnam's independence but was dominated by the Communist Party. Hồ Chí Minh led the Communist-ruled Democratic Republic of Vietnam in 1945, defeating the French Union in 1954 at the Battle of Điện Biên Phủ, ending the First Indochina War. He was a key figure in the People's Army of Vietnam and the Việt Cộng during the Vietnam War, which lasted from 1955 to 1975. North Vietnam defeated South Vietnam and the US military forces, and Vietnam was officially unified in 1976. Saigon, the former capital of South Vietnam, was renamed Ho Chi Minh City in his honor. Ho officially stepped down from power in 1965 due to health problems and died in 1969. The details of Hồ Chí Minh's life before he came to power in Vietnam are uncertain. He is known to have used between 50 and 200 pseudonyms. Information on his birth and early life is ambiguous and subject to academic debate. At least four existing official biographies vary on names, dates, places, and other hard facts while unofficial biographies vary even more widely. Aside from being a politician, Ho was also a writer, a poet, and a journalist. He wrote several books, articles and poems in Chinese, Vietnamese and French. 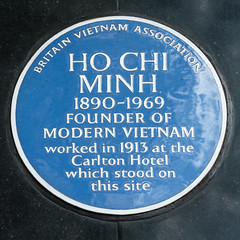 , Newhaven, United Kingdom where they was