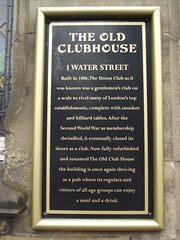 The Old Clubhouse 1 Water Street Built in 1886, The Union Club as it was known was a gentleman's club on a scale to rival many of London's top establishments, complete with snooker and billiard tables. After the Second World War as membership dwindled, it eventually closed its doors as a club. Now fully refurbished and renamed The Old Club House the building is once again thriving as a pub where its regulars and visitors of all age groups can enjoy a meal and a drink.