David "Davy" Crockett (August 17, 1786 – March 6, 1836) was a 19th-century American folk hero, frontiersman, soldier, and politician. He is commonly referred to in popular culture by the epithet "King of the Wild Frontier". He represented Tennessee in the U.S. House of Representatives and served in the Texas Revolution. Crockett grew up in East Tennessee, where he gained a reputation for hunting and storytelling. After being made a colonel in the militia of Lawrence County, Tennessee, he was elected to the Tennessee state legislature in 1821. In 1825, Crockett was elected to the U.S. Congress, where he vehemently opposed many of the policies of President Andrew Jackson, most notably the Indian Removal Act. Crockett's opposition to Jackson's policies led to his defeat in the 1831 elections. He won again in 1833, then narrowly lost in 1835, prompting his angry departure to Texas (then the Mexican state of Tejas) shortly thereafter. In early 1836, Crockett took part in the Texas Revolution and was killed at the Battle of the Alamo in March. Crockett became famous in his own lifetime for larger-than-life exploits popularized by stage plays and almanacs. After his death, he continued to be credited with acts of mythical proportion. These led in the 20th century to television and movie portrayals, and he became one of the best-known American folk heroes. 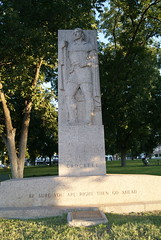 Jonesboro. (About a half mile NW was 19th century town) One of first ports of entry i...
Manchester, TX, United States 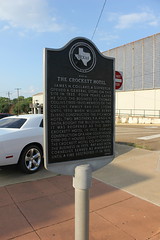 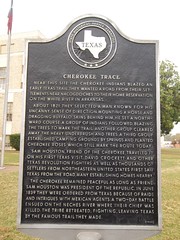 ?, Ozona, TX, United States where they is commemorated

?, Ozona, TX, United States where they was

Crockett. Founded 1837. Named for David Crockett, who had visited here on way to the Alamo, 1836. Old fortified log courthouse was often the refuge for settlers during Indian wars. During Civil War had camp of instruction. Telegraph and stagecoach station for South. Forestry, farming and livestock center. #7037

?, Crockett, TX, United States where they is commemorated

Crockett Park. Named for David Crockett (1786-1836), the colorful Tennessee pioneer and congressman who rallied to cause of Texas in her war for independence. Late in 1835, Crockett traveled by riverboat, horseback, and on foot, entering Texas along the Red River (NE of here). Camping at a site half a mile northeast of this park, he found wild bees and honey in hollow trees. In letters to family and friends, Crockett called the campsite a "honey grove." It is said he told his friends he would settle here later, but in a few weeks he died in cause of freedom at the Alamo. One of Crockett's old friends, Tennessee surveyor Samuel A. Erwin (1786-1854), became the first settler here (1839) and first postmaster (1846). Benjamin S. Walcott, arriving in 1848, added land of his own to his wife's legacy from James Gilmer. With Erwin as co-founder, he platted town of Honey Grove on the Gilmer grant. He also erected first stone building. By 1885, Honey Grove had many businesses, including a weekly newspaper, "The Independent." Gulf, Colorado & Santa Fe Railroad reached here in 1887. A peak of 4,000 inhabitants was attained in 1890. Situated on land bought from W. J. Erwin (1919) this park provides recreation for a dynamic community. #8862

?, Honey Grove, TX, United States where they is commemorated

De Kalb. Named for Maj. Gen. Johann de Kalb - a hero of the American Revolution - upon suggestion (1836) of David Crockett, a visitor on his way to fight in Texas War for Independence. Other Texas heroes traveling through here were James B. Fannin and Wm. B. Travis. Settled by 1831, when land was given for a public school by Dr. W. H. Boyce, Wm. L. Browning, D. M. Chisholm, Clement R. Johns and Judge (and Dr.) James W. Smith. Site of first college in Bowie County, founded in 1839 and of Ninth Masonic Lodge in Texas, organized 1840. Served as county seat, 1840-1841. On two early stagelines. A stopover for U.S. immigrants to Texas Republic, and 49'ers on way to California gold rush. In 1870's hideouts of train robbers Sam Bass, Jesse James, other notorious characters were nearby. Texas & Pacific Railroad reached here 1876. Site in 1889 of P. S. Ramseur's sawmill which shipped high quality lumber all over United States; to get logs to mill, he built a railroad, traces of which still exist. Although in 1896 and 1923 most of businesses were destroyed by fires, city prospers today. Center of ranching, truck farming, and pulpwood productions. Known as "The Pride of East Texas". (1966) #9475

Trammel's Trace. Entered Texas at this point. The 1813 road from St. Louis brought in great numbers of pioneers: Stephen F. Austin, his settlers, Sam Houston, James Bowie, David Crockett and others who died in the Texas Revolution. From here pointed southwest. Crossed the Sulphur at Epperson ferry, going south to Nacogdoches, linking "Southwest Trail" with the King's Highway to Mexico. Surveyed by Nicholas Trammel (born in Nashville, Tenn., 1780; died, LaGrange, Texas, 1852), one of a family of U. S. surveyors and scouts. Mapped many trails, but only this one bears his name. (1965) #9511

?, Texarkana vicinity, TX, United States where they was

Cherokee Trace. In 1821 near this site, Cherokee Indians blazed a trail from near Nacogdoches, Texas, to their home reservation at White River, Ark. They slashed trees, cleared path, planted "Cherokee" roses, and established camps at springs. Used by Sam Houston, friend of the Cherokees, on his move to Texas; by David Crockett, other soldiers of the Texas Revolution, and thousands of immigrants. After June 1839, when Texas settlers drove the Cherokees out of the state, the Indians departed over this trail; others traveled it for years thereafter. #9939

David Crockett Middle School (RAZED). Originally known as South End Junior High School, this structure was designed and built in 1923 by the Austin architectural firm of C. H. Page. The first classes were held here in the fall of 1924, and in 1926 the students voted to change the school's name to honor Texas hero David Crockett. A good example of schoolhouse architecture from the post-World War I period, the building features decorative stonework and an entry arch in the Tudor Gothic revival style. Recorded Texas Historic Landmark - 1984 #10505

1400 Royal St, Beaumont, TX, United States where they is commemorated

A House of the William Becknell Family. William Becknell (1788-1856) of Missouri is renowned for opening the Santa Fe Trail from the United States into Spain's New World Empire in 1821. He and his wife Mary settled in 1835 near here, on Becknell's Prairie, with a daughter and two sons. On the way to the Alamo, David Crockett visited them. Becknell himself fought in 1836 in the Texas War for Independence. After milled lumber became available, he or his family built the earliest portion of this house. It was later enlarged and relocated. Restored by Ella Ruth and Harold Wallace in 1968. #10866

A. E. Gossett Home. House of typical southern plan, with separate kitchen in back yard, Built 1835 by A. E. Gossett, owner of large land grant from Mexico. An early 1836 visitor was former Tennessee neighbor, Col. David Crockett, on his way to the Alamo, and camping with his company for a night at the spring nearby.

Site of the Crockett Hotel. James H. Collard, a surveyor, opened a general store on this site in 1837. Four years later he sold the business to Thomas Collins (1800-1869). Members of the Collins family ran the store until 1890 when William Berry (b.1856) constructed the Pickwick Hotel. Two brothers, F.A. and J.H. Smith, bought the building in 1921. It was reopened as the Davy Crockett Hotel in 1927. During construction of a new courthouse (1938-39), it housed county offices. The Crockett Hotel Co. purchased the business in 1939. Ray and Alta Cornelius served as managers until a fire destroyed it in 1972. (1980) #11089

?, Crockett, TX, United States where they is commemorated

Cherokee Trace. Near this site the Cherokee Indians blazed an early Texas trail. They wanted a road from their settlements near Nacogdoches to their home reservation on the White River in Arkansas. About 1821 they selected a man known for his uncanny sense of direction. Mounting a horse and dragging buffalo skins behind him, he set a northward course. A group of Indians followed, blazing the trees to mark the trail. Another group cleared away the heavy underbrush and trees. A third group established camping grounds by springs and planted Cherokee roses which still mark the route today. Sam Houston, friend of the Cherokee, travelled it on his first Texas visit. David Crockett and other Texas revolution fighters as well as thousands of settlers from northeastern United States first saw Texas from the road, many establishing homes nearby. The Cherokee remained peaceful as long as friend Sam Houston was President of the Republic. In June 1839 they were ordered from Texas because of raids and intrigues with Mexican agents. A two-day battle ensued on the Neches River where their chief was killed. The tribe retreated, fighting, leaving Texas by the famous trail they made. #11302