Grace O'Malley (c. 1530 – c. 1603; also Gráinne O'Malley, Irish: Gráinne Ní Mháille) was chieftain of the Ó Máille clan in the west of Ireland, following in the footsteps of her father Eoghan Dubhdara Ó Máille. She was a product of the Gaelic world of her time and, despite her interaction with English officials, may have known no English. She was apparently well-educated and was regarded by contemporaries as being exceptionally formidable and competent. Upon her father's death she inherited his large shipping and trading business (a trade sometimes referred to as mere piracy). The income from this business, the land inherited from her mother, and the property and holdings from her first husband, Dónal an Chogaidh (Dónal "the warlike") Ó Flaithbheartaigh, allowed her to become very wealthy (reportedly owning as much as 1000 head of cattle and horses). In 1593, when her sons Tibbot Burke (Tiobóid de Búrca) and Murrough O'Flaherty (Murchadh Ó Flaithbheartaigh), and her half-brother Dónal na Píopa ("Dónal of the Pipes") were taken captive by the English governor of Connacht, Sir Richard Bingham, O'Malley sailed to England to petition for their release. She formally presented her request to Elizabeth I at her court in Greenwich Palace. Commonly known as Gráinne Mhaol (anglicised as Granuaile) in Irish folklore, she is a well-known historical figure in 16th-century Irish history, and is sometimes known as "The Sea Queen of Connacht". Her biography has been written by historian Anne Chambers. Her name was rendered in contemporary documents various ways including Gráinne O'Maly, Graney O'Mally, Grainne Ní Maille, Granny ni Maille, Grany O'Mally, Grayn Ny Mayle, Grane ne Male, Grainy O'Maly, and Granee O'Maillie. 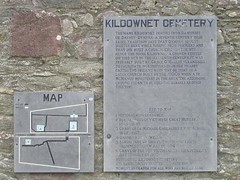 Kildownet Cemetery the name Kildownet derives from Damhnait or Daynet, Dympna a seventh century Irish Saint. Tradition says that Dympna sought shelter here while fleeing from pursuers and that she built a church Cill on the site hence the name Kildownet. A church existed on this site in the sixteenth century. It was probably built by Grace O'Malley Granuaile to facilitate worshippers from her nearby castle. The present ruin may be that of a later church built in the 1700s when a Fr. McManus ministered in the area. The adjoining ground began to be used for burials around this time.

The Wild Atlantic Way, Cloughmore, Ireland where they was