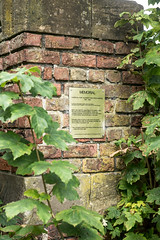 Liverpool Port Authority Isolation Hospital 1875 - 1963 "In memory of the people; travellers, sailors and foreigners that passed through this gateway - Never to return to their loved ones" Built to decongest the Mersey River of the isolation ships that were moved offshore containing travellers with contagious disease; this hospital treated over 1,200 cases of tropical disease during the 88 years it was open. Eventually closing its doors, it was razed to the ground by controlled fire in 1963. All that remains is this pillar and the low stretch of sandstone wall. "Now a woodland tribute to the memory of those that worked and died within these walls"