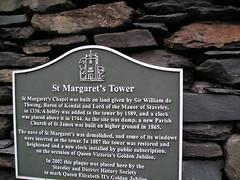 St Margaret's Tower. St Margaret's Chapel was built on land given by Sir William de Thweng, Baron of Kendal and Lord of the Manor of Staveley, in 1338. A belfry was added to the tower by 1589, and a clock was placed above it in 1744. As the site was damp, a new Parish Church of St James was built on higher ground in 1865. The nave of St Margaret's was demolished, and some its windows were inserted in the tower. In 1887 the tower was restored and heightened and a new clock installed by public subscription, on the occasion of Queen Victoria's Golden Jubilee. In 2002 this plaque was placed here by the Staveley and District History Society to mark Queen Elizabeth II's Golden Jubilee.