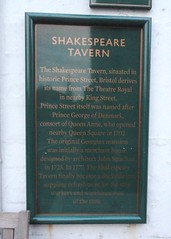 Shakespeare Tavern. The Shakespeare Tavern, situated in historic Prince Street, Bristol, derives its name from The Theatre Royal in nearby King Street. Prince Street itself was named after Prince George of Denmark, consort of Queen Anne, who opened nearby Queen Square in 1702. The original Georgian mansion was initially a merchant house designed by architect John Strachan in 1725. In 1777, the Shakespeare Tavern finally became a dockside inn, supplying refreshment for the ship workers and warehousemen of the time.