Samuel Willis Tucker Lanham (July 4, 1846 – July 29, 1908), was the 23rd Governor of Texas from January 20, 1903 to January 15, 1907. He was a member of the Democratic Party. Prior to winning election as governor, he served two periods in the US House of Representatives. He served five terms from the 11th District (which covered a vast area of West Texas) then ran for governor, losing in his first attempt. When he returned to Congress, it was in the Eighth District, where he served 4 terms. 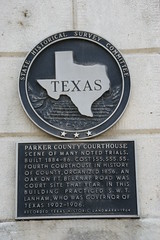 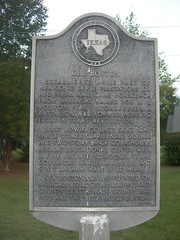 Governor S.W.T. Lanham. A South Carolinian, Samuel Willis Tucker Lanham volunteered at age 15 and fought 1861-65 in the Civil War. In 1866 he married Sarah Beona Meng and moved to Texas. The Lanhams taught school, first in Bowie County, then in Weatherford. Admitted to the bar in 1869, Lanham in 1871 became district attorney for five counties, including Parker. Also in 1871 he began to build his home at this site, enlarging it later. His speeches in 1871 at the trial of Indian chiefs in the Warren Wagon Train Massacre brought him fame at age 25. Elected United States Congressman in 1882 for the 98-county "jumbo" district of West Texas, he served as a national lawmaker for 17 years. S.W.T. Lanham was the last Confederate veteran to be governor of Texas, 1903-07. He led in reviving East Texas iron works, began fiscal balance practices in state government, and invoked social justice. Laws made in response to his policies covered vital tax reforms, child labor curbs, uniform textbooks, and the Terrell Election Law to enable voters to nominate officials by ballot rather than in conventions. Governor and Mrs. Lanham had eight children, including U.S. Congressman Fritz Lanham. The Ex-Governor died here at his home and is buried in Weatherford. (1978) #2235

Old City Greenwood Cemetery. This cemetery was formally established by the Weatherford town council in 1863 when lots were surveyed and the exact cemetery location was staked. Previous interments were made in the unmarked streets of the town. The mayor directed those remains be moved to the new cemetery. Historian H. Smythe noted in 1877 that the cemetery was a "sadly neglected spot," without a fence. By 1925 the civic league and cemetery association had been formed. The accomplishments of its women members were many. In addition to site beautification, the driveways were widened and graveled. A water well and windmill were installed, and a sexton was employed to secure the grounds. Cemetery care declined in the 1930's and later. Among the estimated 1,000 graves are Civil War medal of honor recipient Chester Bowen; trail drivers Oliver Loving and Boze Ikard; cattleman and founder of the Citizens National Bank J.R. Couts; Governor of Texas (1902-06) S.W.T. Lanham and his son, congressman Fritz G. Lanham; veterans of many wars; and pioneers of early Texas history. Restoration of the cemetery began in the late 1980's. The site continues to serve the area. (1996) #3708

400 Front Street, Weatherford, TX, United States where they was buried (1908)

Samuel Willis Tucker Lanham. S.W.T. Lanham was born on July 4, 1846 to James and Louisa (Tucker) Lanham in South Carolina. He joined the Confederate Army in 1861, serving in the Third South Carolina Infantry, and was wounded at the Battle of Spotsylvania Court House, 1864. He wed Sarah Meng in 1866, and they moved to north Texas, relocating in 1868 to Weatherford, where he became a lawyer. He gained notoriety as a district attorney in the Warren Wagontrain Raid cases, and he served five terms as U.S. Congressman between 1882 and 1903. He began his first of two terms as Governor in 1902. Lanham retired to Weatherford in 1907 and served as a University of Texas regent. He died in 1908. (2006) #13301