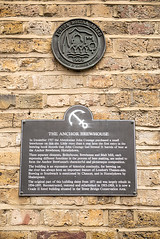 The Anchor Brewhouse In December 1787 the Aberdonian John Courage purchased a small brewhouse on this site. Little more than a year later the first entry in the brewing book records that John Courage had brewed 51 barrles of beer at the Anchor Brewhouse, Horselydown. Three separate elements, Boilerhouse, Brewhouse and Malt Mill, each expressing different functions in the process of beer making, are united to form the Anchor Brewhouse's characterful and picturesque composition. The building is an expression of historical continuity, for brewing on the river has always been an important feature of London's Thames-side Brewing in Southwark is mentioned in Chaucer, and in Horsleydown by Shakespeare. The original part of this building dates from 1871 and was largely rebuilt in 1894-1895. Reconstructed, restored and refurbished in 1985-1989, it is now a Grade II listed building situated in the Tower Bridge Conservation Area.