Wendy Richard MBE (born Wendy Emerton; 20 July 1943 – 26 February 2009) was an English actress, known for her television roles as Miss Shirley Brahms on the BBC sitcom Are You Being Served? and Pauline Fowler on the soap opera EastEnders from 1985 to 2006. Despite being well-known for her distinctive Cockney accent, Richard was born in Middlesbrough. After a childhood in which her father committed suicide, Richard worked in various department stores to pay her drama school fees before appearing regularly on-screen from the early 1960s. She became well-known in 1967 playing Joyce Harker in The Newcomers until 1969. Richard then starred in two Carry On films and popular series including Dad's Army, appearing as Private Walker's girlfriend, before being cast as Miss Brahms in Are You Being Served? in all 69 episodes from 1972 to 1985. She also reprised the role in the sequel series Grace and Favour in 1992 and 1993. The same year that Are You Being Served? ended, Richard starred as Pauline Fowler in the first episode of EastEnders, a main role that she would play in over two thousand episodes until she departed in 2006. Richard was awarded an MBE in 2000 and in 2007, Richard was awarded the 'Lifetime Achievement Award' at the British Soap Awards for her role in EastEnders. After leaving EastEnders, Richard continued to appear on-screen until her death in 2009. Richard was married four times, including one husband who physically abused her and another who sold false stories about her to the tabloids. After being diagnosed with breast cancer in 1996, the disease returned in 2002 and again in 2008 in which this time had spread all over her body. Richard made a documentary detailing the last few months of her life before her death in February 2009. 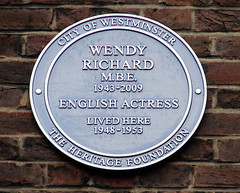